Several cryptocurrencies are emerging to take on the king of the hill, Bitcoin. Ethereum‘s (CRYPTO:ETH) trading price rose 408% in 2021. Investors like Ethereum as a viable competitor to Bitcoin because of its faster transaction speeds and its large ecosystem of decentralized applications (dApps), which are programs that run on blockchains.

But there is another up-and-coming crypto starting to show promise. NEAR Protocol (CRYPTO:NEAR) rose 984% last year. This layer-one blockchain offers similar benefits in transaction speeds and utility value as Ethereum, but with much greater upside potential. Let’s check it out. 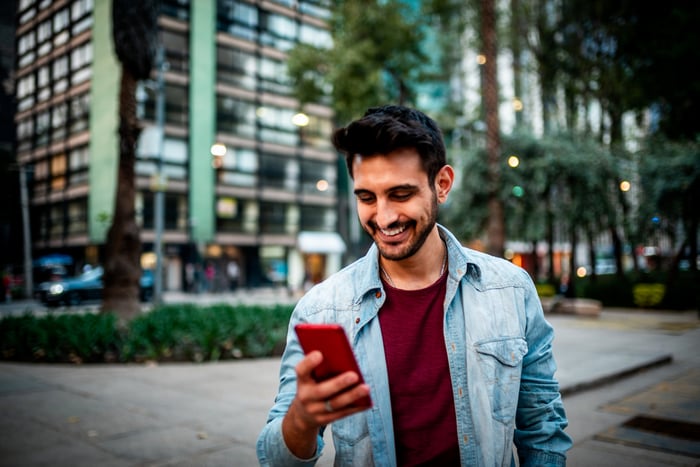 The entire crypto market is currently worth just over $1.5 trillion. If you’re looking for a relatively safe but strong performer that can multiply your original investment, I would look at smaller blockchains that are seeing price momentum supported by a growing developer community.

NEAR currently has a market cap of $6.2 billion. It could rise 42-fold in value, and it would still only match Ethereum’s current market cap of $268 billion.

On the other hand, if Ethereum increased 42 times in value, it would command a market cap of over $11 trillion, which is not likely to happen anytime soon.

Supporting the upside case for NEAR are some key developments in the past year that are starting to attract investor interest.

It can take six minutes to finalize a transaction on the Ethereum blockchain, but NEAR can currently process up to 1,000 transactions per second and has the potential to reach 100,000 per second.

NEAR uses a technology called sharding, which fundamentally makes it faster than Ethereum. With Ethereum, every transaction must be processed through every node in the network, which slows it down. But with sharding, the work is split among different nodes, so transactions can be processed much faster.

The NEAR Foundation says the rollout of its Simple Nightshade sharding mechanism will make its blockchain “super-fast, incredibly secure, and capable of onboarding millions of users into the world of Web3 without skipping a beat.”

In the same announcement, NEAR disclosed that only 13% of the network was being used in mid-November of 2021, but the NEAR team said that the average number of daily transactions had risen to more than 300,000, with “more and more projects building” on the blockchain. Prices of cryptocurrencies tend to follow growth in developer projects, so this is a strong indicator of where NEAR might be heading.

NEAR has one of the fastest-growing developer communities, and that’s being validated by a rising value in the market. I believe it’s a promising cryptocurrency to buy with higher upside than Ethereum in 2022.

This article represents the opinion of the writer, who may disagree with the “official” recommendation position of a Motley Fool premium advisory service. We’re motley! Questioning an investing thesis — even one of our own — helps us all think critically about investing and make decisions that help us become smarter, happier, and richer.

I'll be the first to admit that I was initially skeptical about cryptocurrencies. Some of legendary investor Warren Buffett's criticisms...

Ethereum price is now down over 50% from the all-time high. ETH is close to fulfilling one of the strongest...

In recent months, the PoW consensus mechanism has received scrutiny by lawmakers globally for its energy consumption. Most recently, the...

Ethereum: what a decline! | On-chain data speak of recovery for ETH

Sales involving the entire sector of cryptocurrencies in the night between Friday And Saturday last have not spared Ethereum, which...

OpenSea and NFT issuers have transferred 56,300 Ether to exchanges and in royalties over the past two weeks.  The spike...

Copyright © 2021 Coin3 - An Automatic Gateway for Crypto News and Updates.